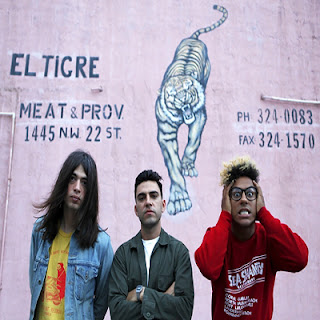 Miami's own garage indie rockers have finally released their self-titled debut album and it's a killer. Having dug through their parents Jesus and Mary Chain records and milked them for all their worth the Jacuzzi Boys have harnessed a sound that feels like the Reid Brothers leading The Drums in a rioutous. noisy, raucous tour of pop music.

Jacuzzi Boys is a chaotic, feedbacky, rough, and ragged record that is redonkulously catchy. These guys have a brilliant appreciation for what makes a great tune and they slather that appreciation all over the songs here. Catchy choruses, simple riffs that drill themselves into your skull, fuzzy walls of guitar noise that overwhelm you and an undoubtedly cool aura all contribute to this record being amazing. There's nothing complicated here and it's all pretty basic stuff but there doesn't need to be anything over the top because what these guys have done with their songs and their guitars is so pure and honest they don't need to bury themselves in those ideals.

When I lived in Miami a band like this could have never existed; it just wasn't possible.. because it wasn't Miami-bass influenced. So, It's amazing to see and hear a band like this doing well not only in the 305 but nationally. Jacuzzi Boys is a fantastic record that's got to be one of my favorites this year and the fact that it's from a bunch of local dudes made good is even better.
Posted by Paul POP! at 4:25 PM