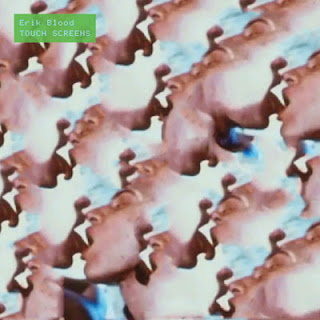 Erik Blood is a solo artist with a difference. Having worked with a diverse roster of artists like Shabazz Plaaces and THEESatisfaction the guy has been exposed to an amalgamation of sounds and influences and as a result managed to expand his fan base while doing it. His album Touch Screens is a reflection of all those outside forces and his own personality coming together under the guise of song. The result is a record that sounds like a post-shoegazing blue-eyed soul dream come true that's lost in a sea of distortion.

Easily lumped into the growing numbers of post-shoegazing bands out there, Erik Blood ends up sounding something like Kevin Shields practicing in his bedroom on a 48 track analog recorder. If you can imagine how rehearsals that epic would sound then you can imagine just how great Touch Screens actually is. While released within the last year it has that authentically vintage 90's vibe to it. Probably recorded with more pedals imaginable and enough riffs to last a lifetime, Erik Blood crafts sheets of noise that reverberate off of everything and wash over you like a twenty foot wave. It's dreamy and psychedelic stuff that while noisy and chaotic is still remarkably easy on the ears.

The songs themselves come at you like a right hook because just glancing at the packaging you would not expect what is contained within. These heavenly songs are hidden underneath and behind rather perverse packaging that's all very clever and misleading. Unless you actually sit down and listen to Touch Screens you'll have no idea what you're in for or what it's about. Quite honestly, I thought I was in store for an electro record or synth pop seduction and not something so unearthly and noisy. Erik Blood has done a good job of playing tricks with your ears and sensibilities here and it's one reason why this record is so good.

Good things do come in small packages and Erik Blood is proof of that. Touch Screens is an impressive effort and it's a reflection of Blood's exposure to many outside forces. It's an expansive soaring record that's soulful while being lost in a haze and it has enough distortion and noise to keep you hypnotized and stunned. There aren't a lot of records nowadays that sound as if they were beamed in directly from 1991 but this is one and it's simply fantastic.
Posted by Paul POP! at 5:50 PM