The Discipline and Communication of Shmu 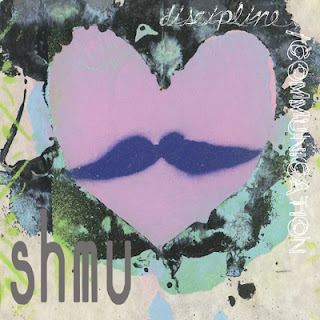 The oddly named band Shmu play odd music for slightly odd people. Their album Discipline/Communication is a Spinal Tap-like odyssey into realms of rock and roll few bands ever reach for much less get there. Combining post shoegazing, post rock, jazz, prog rock and just about everything else these guys create their own little world which they've hesitantly invited us into.

Sounding like a stranger version of Aloha, Shmu have technical skills that put most indie rock bands to shame. These guys can play and I suspect that's half the reason why they write such challenging and intricate music in their own little world. They're ability to shift between genre's and write complex music while in each one is truly a tribute to their ability as musicians and songwriters. Discipline/Communication is an awesome record of musical prowess and complex construction. Utilizing all the usual instrumentation but layering in electronics, beats, backwards sounds, and lots of other fun stuff this is one record that never ceases to peak your curiosity and make you ask, “How'd they do that?”

From jazzy interludes to electronic space jams and primitive percussion gone awry these guys experiment with everything and find musical inspiration in unlikely places. It's not necessarily the poppiest or catchiest thing you'll hear in 2012, but it's easily one of the more intriguing records to come out this year. Whether it sounds like a washed out My Bloody Valentine tune or a Pat Metheney jam Discipline/Communication has something for everyone.
Posted by Paul POP! at 6:18 AM

Email ThisBlogThis!Share to TwitterShare to FacebookShare to Pinterest
Labels: shmu