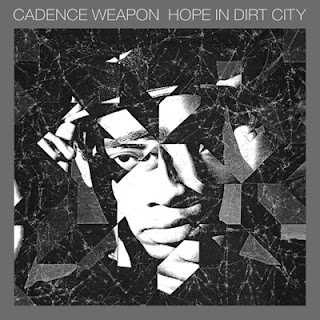 Cadence Weapon is back with another intelligent rhyme fest that takes things from the club to the library back to the club then a spin around current events and seemingly everything in between. His latest album Hope In Dirt City is a fantastic return to form and sees Cadence rapidly securing his place as one of independent hip hop's most dignified stars. From jazzy tunes to electro pop, club bangers to straight forward hip hop it's all here and Cadence Weapon uses words to pepper each of those songs to create missives, rants, and raves. It's all very good and very different from what litters the airwaves and clogs the charts under the guise of “hip hop.”

Hope In Dirt City is a raw and powerful record but that should be expected because with a title like that it almost has to be. And yet despite the powerful nature of the rhymes and beats herein the hope pulsating through the title lends a positive aspect to it all and drives the thing forward. These may be dark times but there are glimmers of positivity and this album proves it. As if to make like of that, Cadence has a dark sense of humor and a quick wit which allows him to shove quirky lines here and there and make you ask yourself, "Did he really just say that?" Chances are he did indeed.

If all that wasn't enough it's not every day you hear a hip hop artist (or any artist) reference Tesla, but here's Cadence Weapon dropping the scientist as if it were no big deal. While the guy clearly has a head on his shoulders he also knows how to have fun and he does throughout the record. Whether it's his sense of humor, chilled jams or all out club bangers Cadence Weapon realizes variety is the spice of life; check "Hype Man," for a clear example of his ability to make Outkast blush.

Hope In Dirt City is a varied and exciting record that proves that this Cadence Weapon is deadly. The guy can wrap rhymes around any beat and make them work and sound like they were meant to be. He can sound like he's rapping a term paper one second and then drop something that's bound to fill a dance floor the next. How could that not be impressive? He's good, he's really good and it's only further proof that the independent hip hop movement does things that commercial hip hop is too afraid to try. Needless to say there is Hope In Dirt City.
Posted by Paul POP! at 6:01 PM