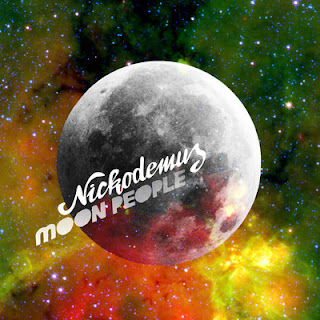 Nickodemus has been bringing global dance grooves to the floor since he started spinning at the Giant Step parties that rocked New York in the mid-90's. Since then he's founded additional parties and mixed all kinds of sets with live musicians. Of course that's never enough, so aside from DJing around the world Nick has also managed to produce records that are worthy of their own right and stand on their own two feet (or sides I suppose). Of course, that's what brings us here today is Nick's latest album Moon People.

With enough world music influences to fill the globe, and enough global grooves to last a lifetime Nickodemus spares no expense when it comes to constructing his songs. With chilled out beats, accordions, jazzy influences, dubbed basslines and just about anything else he can find Nickodemus builds songs that come at your from every corner of the planet. No stone is left unturned and as a result his tunes are open minded, expansive, and thoroughly listenable. Most of Moon People hovers between chill out and downtempo house like jams and the jazzy, dubbed out, gypsified influences create this otherworldly feeling that's hard to beat. This is atmospheric and brilliant stuff that's in touch with it's global surroundings and only too happy to show it.

Moon People is a fantastic journey around the globe that you can take from the luxury of your own living room. He's awesome and with so much experience under his belt it's no wonder that Moon People is so blindingly brilliant.
Posted by Paul POP! at 6:12 AM

Email ThisBlogThis!Share to TwitterShare to FacebookShare to Pinterest
Labels: nickodemus