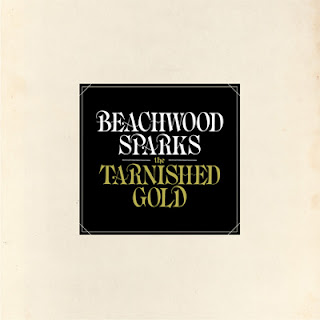 Holy Alt Country Batman, Beachwood Sparks have returned. Their latest album Tarnished Gold is anything but a departure for these country rockers who love to twang things out. Essentially perfecting the formula that they've been using for ever and a day, Beachwood Sparks have honed their dusty songwriting to a fine point and it's practically lethal. These guys get their sound and understand it so well that despite being named Tarnished Gold fans of the band and genre will see this as a shining, glistening, nugget of alt-country.

With enough twangy guitar, dreary vocals, and a rustic feel Tarnished Gold is more country than about 90% of country music released today. This is pure honest dusty and dear stuff that's heartbroken, lost, and feeling down. And who can blame it for being that way when you name songs, "Talk About Lonesome," you're not exactly all sunshine and rainbows. But I suspect that's half of this record's charm; the loneliness and desolation that surrounds every guitar riff, pedal steel twang, and multipart harmony is inspired by those feelings. It's not really bad in anyway shape or form…and yes I said that. Beachwood Sparks are so good at what they do that they could probably write three or four albums like this in their sleep...they’ve mastered the formula that well.

With a seemingly broken heart and more rustic tuneage than the entire Nashville music complex combined Beachwood Sparks have meticulously created a record that's so authentic you can't help but wonder if these guys aren't all named Grizzly, live in a log cabin or farm, and drive a broken down 1973 Ford F-150 with a busted headlight. This is the sound of old country modernized and it's so pure you can almost feel it.
Posted by Paul POP! at 2:07 PM