Redgrave Is One Heck Of A National Act 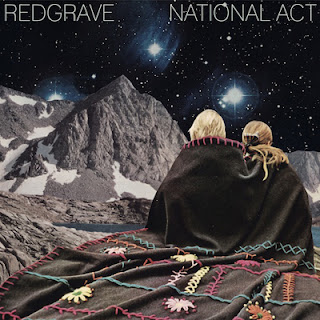 Holy blues rock Batman, Redgrave have just had a blues explosion all over their latest record National Act. This five track EP of heavy chords, churning drums and bass, and vocals that sound like Grace Slick at her finest is one stormy rock and roll record. National Act is a power chord feast that chugs along slowly but devastatingly so; crushing all who stand in it's way. Redgrave know how to tune down, turn up, and kick out the jams and they do just that through the five tracks that blew up here.

Not terribly catchy but overwhelmingly heavy National Act makes it's impact by simply forcing itself upon you. This is a surge of unstoppable willpower that's going to have it's way with you whether you like it or not. My suggestion is to let it do just that because otherwise you'll suffer a broken skull and ruptured ear drums and that's going to hurt far more than their amps turned up to 11. National Act is rock and roll that's pure, simple, powerful, and the sort of thing that would make Jack White think about retirement. If you like raw unfiltered rock and roll then Redgrave are the National Act you've been searching for.
Posted by Paul POP! at 4:38 AM

Email ThisBlogThis!Share to TwitterShare to FacebookShare to Pinterest
Labels: redgrave