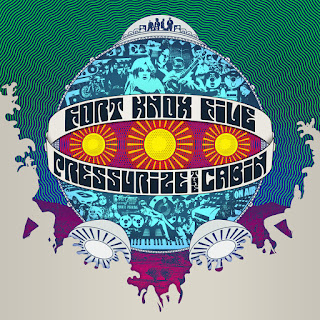 Fort Knox Five's new album Pressurize the Cabin is the funkiest thing I've heard in a very, very long time. Sounding like something that Cornershop and Fatboy Slim would have produced back in 1998 this record is a big beat party that's barely able to contain itself. With grooves thicker than concrete and rhymes that are stickier than taffy this record is a non-stop funk fest that's guaranteed to level dance floors, save parties from boredom, and drill its way into your collective consciousness.

Pressurize the Cabin is packed with absolutely massive hooks that not only come from the rhymes and beats but the entire rhythm section. This is a band so in-tune with creating funky jams that their guitars, keys, bass, and drums almost play themselves. From horns to fat drum beats this record jumps thru 4/4 time signatures like a Olympic hurdler over hurdles. Throw in a wry sense of humor to this non-stop party and you have a record that's brimming with positivity and good vibes.


There is nothing at all wrong with Pressurize the Cabin. Fort Knox Five have created a record that's the sound of your next party and every subsequent one after. These guys bring the funk, settle the funk in and never let the funk leave. Amazing from start to finish this record reminds me of how fantastic big beat used to be and how great it could be again. Pressurize the Cabin is a necessity much like food and shelter.
Posted by Paul POP! at 11:32 AM