Versus Is Well Worth The Trip To Eureka California 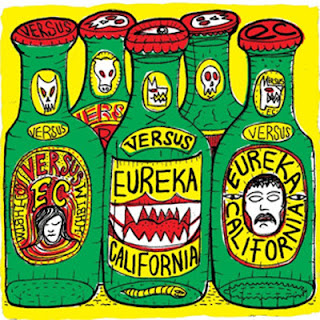 As shambolic as the cover would seem to indicate Eureka California’s Versus is a crazy ride through the indie rock lexicon.  Sounding like a perfect smash up between Daydream Nation era Sonic Youth, Slanted and Enchanted Pavement, a bit of Superchunk and some surf guitar Versus is a noisy wrangled record of chaotic fun.  This is a sloppy and loud record that hits you over the head with massive melodies, geeky guitar work, and songs that are hard to forget.

Eureka California don’t necessarily write anything overly complicated but what they do write seems to be held together by some broken guitar strings, duct tape, and a bit of luck.  It’s all very messy but its simplistic nature is its greatest asset.  This is a homage to classic 90’s indie rock made with a heart the size of Texas and it’s so in love with that era it’s hard to believe this was released this year.  Versus is an awesome listen and catchier than the zika virus it’s songs recklessly careen through three minutes like a 90 year old granny backing up in a parking lot.  Rough, raw and prone to blowing speakers Versus is a shining example of how indie rawk should be played.

Eureka California’s Versus could fall apart at any point while it’s being listened to.  Its disheveled songs, shaky walls of noisy guitars and muddled melodies somehow manage to hold together just long enough to work their way into your consciousness and never leave.  It is almost impossible to dislike sloppy stuff like this because its organic nature is so unpolished and raw that its intentions are laid bare. Eureka California are an awesome band and Versus is a trip well worth making.
Posted by Paul POP! at 7:21 AM