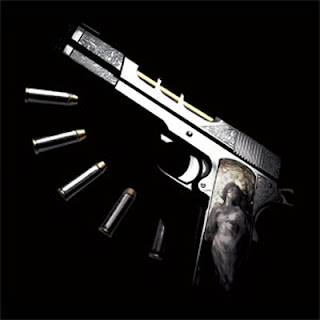 The words atmospheric and hip-hop are two words that aren't usually associated with one another. Let's face it, it just doesn't seem to make sense, but to Gene the Southern Child and Parallel Thought it does and in fact they've made a whole album that's based on that very idea. Going by the name Artillery Splurgin' it's the sort of thing that raises all kinds of musical questions. While your first impression of this more than likely will be, "How can this possibly work?" when it does you'll be left shaking your head at just how genius it really is.

With stark beats, minimal production, even moments of cool jazz Artillery Splurgin' comes straight out of left field and leaves you speechless with just how weirdly cool this all sounds. If hip-hop could be downtempo and downtrodden then that's what Artillery Splurgin' would be; this is slow moving, dark, dreary, and depressing stuff. Artillery Splurgin' , of course, is angry, violent, and threatening to go off the handle in a moments notice but when you ad these dark musical clouds of doom to these strange atmospherics it all becomes so depressing and un-cliche. Parallel Thought and Gene the Southern Child have shot forth a crazy idea that wound up being an awesome record that's so stark, so gloomy, and so good.

With rolling beats, flowing lyrics that hit right between the eyes and atmospherics that make Artillery Splurgin' seem post apocalyptic there's a lot to like about this album. Far from the norm or boring, Parallel Though continues to offer his listeners cutting edge hip hop that no one else is doing. Artillery Splurgin' is great because it's what hip hop needs to stay vital...filled with fascinating music from artists that push the boundaries and do things from completely different angles than the mainstream.
Posted by Paul POP! at 12:00 AM