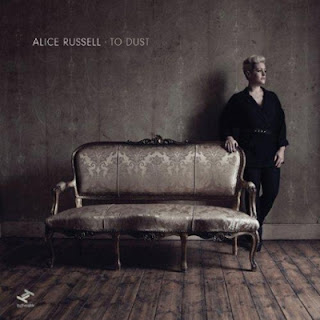 Ever since Amy Winehouse left her jazzy roots behind and found her inner soul diva, the British music scene has been absolutely flooded with proper soul revivalists. This ever growing number of artists has taken the purity of the classic Northern Soul sound and added modern flourishes to it. Among those doing just that is Alice Russell. Her album To Dust is a retro fueled trip back to the past brought bang up to date with stunning production.

Russell can clearly sing the dickens out of anything placed in front of her; she's got this gorgeous near Aretha Franklin like vocal style that's just about perfect. She doesn't wail but she does let her emotions influence her and mixes in blues so effortlessly that the end results are impressive. When you take all of that and mix it in to the rest of the record the results are a constant source of goosebumps. To Dust has a modern R&B vibe to it thanks to the crisp beats but it's Russell's back to the past vocals that really make this record pop. She just makes everything sound nearly tragic and emotionally draining and that's what proper soul is all about. One listen to "Heartbreaker," and you'll see exactly what I'm talking about it; she is one heck of a blues inflected classic soul singer that lets it all hang out on every note.

To Dust is a powerful effort and sees Russell making leaps and jumps from her Pot Of Gold album. To Dust so easily mixes modern with vintage and blues with soul that it's a constant source of fascination. Russell has come up with an impressive set of songs here that are well written and produced and sound like a million bucks (the organ led tracks are awesome). There might be a zillion soul-revivalists out there but only a few rise above the rest and Alice Russell is one of those select few that are heads and shoulders above everyone else.
Posted by Paul POP! at 9:00 AM