MopMop Are From An Isle Of Magic 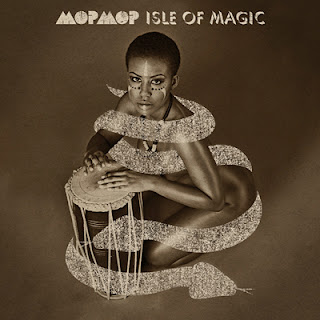 MopMop are an intriguing bunch made up of approximately 7,983,974 musicians. Together this band of musical rogues create an African inflected jazzy affair that's groovy and chilled to perfection. Their album Isle of Magic is a gorgeous record that has so many kinds of instrumentation and so many styles at play here the whole thing is somewhere south of mesmerizing. MopMop are an impressive unit and their ability to take so many global influences and sounds and shape them into cohesive and brilliantly played songs is something that just has to be heard to be believed.

Songs like, "Kamakumba," are simply amazing. The Afro-Caribbean influences shine as bright as tropical sunshine and the steel drums mixed with horns and jazzy vibes create an atmosphere of coolness that sets a tone for all of Isle of Magic. At times tropically chilled and at others sounding like a Gil Scot Heron record, Isle of Magic is a diverse journey that is filled with musical wonderment. The fact that this record was actually created in the middle of Western Europe is mind boggling because no element of Isle of Magic even begins to hint at that. The whole thing just goes to show how awesome MopMop are as a group and how globally influenced these guys seem to be.

Isle of Magic is a fantastic jazzy world record that is so all over the place and steered by so many things you'll need a map to find your way through it. That's okay though because MopMop want you to savor the journey and enjoy all thirteen stops along the way. From tribal beats to steel drums and from xylophones to saxophones it's all here on MopMop's Isle of Magic and it never ceases to impress. It's so good that Isle of Magic is one island you wouldn't mind being stranded on for an eternity.
Posted by Paul POP! at 9:11 AM

Email ThisBlogThis!Share to TwitterShare to FacebookShare to Pinterest
Labels: mopmop