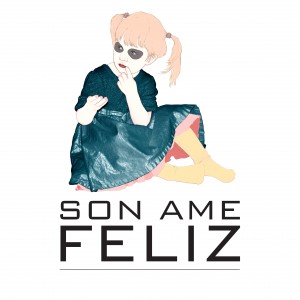 Jeremy Panda is an interesting artist that I know next to nothing about. His album just kind of showed up at my door unexpected encased just in a brown envelope w/no bio or information attached. Through clever deduction here's what I've learned...he's Canadian, he's from Toronto and he can play at an exceptionally high level. His album Son Ame Feliz is a heady mix of indie rock, jam rock, fusion, and mighty fine musicianship that combines into a mind numbing concoction.

With riffs flying everywhere and a level of energy that would suggest some sort of post-nuclear thing, Jeremy Panda and his band set out on a course to out play themselves. They just about succeed as this is one band that's spent a fair amount of time in a practice shed for ages. Hopping between more adult oriented alternative and youthful inspired tunes the band tend to be at their best when they have it floored and their chops are on display. Thankfully, Son Ame Feliz gives the band plenty of opportunities to show all this off. From drumming to synths, to guitars and everything in between Jeremy Panda and his cohorts let it all hang out here. Musically, it's an impressive listen that only occasionally stumbles with rather slow paced songs and kinda middle of the road vocals. But for the most part when these guys play they're on fire.

I'm not sure what to call or what genre Jeremy Panda is. That's a good thing because he's all over the place on most of Son Ame Feliz and as a result my interest never faded. From dark and dim passages to jazz fusion-like workouts it all finds a place on Son Ame Feliz and it only adds to the mystery of who the heck this guy and his band are. My advice to you is don't cop out and Google the band but rather pick up the record and become part of the mystery...it's far more fun.
Posted by Paul POP! at 6:07 PM