Bloody Knives Will Cut Your Heart Out For This 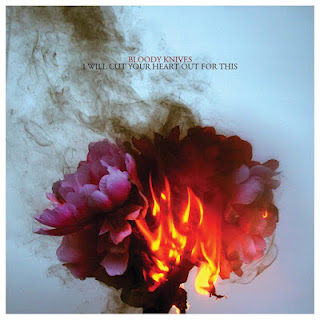 There seems to be two camps in our post-gazing world.  One camp takes the ethereality route create airy, gauzy songs that linger like a spring breeze.  The other camp assaults you with sheets of distortion, noise, and more effects that humanly possible.  This is the camp that unsurprisingly named Bloody Knives belong in.  Their latest album, the family friendly, I Will Cut Your Heart Out For This is a loud, brash, and violent musical attack.

Creating solid sheets of noise, Bloody Knives crank their guitars to 11 put their effects pedals on overdrive and just go.  The songs that make up I Will Cut Your Heart Out For This are aural assaults of cascading waves of distortion that could scare the living daylights out of someone.  This record contains no choruses or things to latch on to.  Rather, it overpowers you with so much guitar wrangling it's hard to discern where riffs begin and end.  This is a record of sturm und drang and it's almost painful to listen to on headphones because of how chaotic and noisy it really is.  I love the idea of this band and their approach is nuts I just wish they had a bit more to cling to.  Really, what they should have done is gotten a black metal vocalist and just gone off the deep end...that would have been unreal.

As it stands though, Bloody Knives are about the most brutal and vicious indie band to walk the planet.  Their songs are visceral, raw and strike at the core of shoegazing.  Like Marmite,  I Will Cut Your Heart Out For This is a love it or hate it kind of thing and where you fall will depend on what you hear when you listen to it.  But know this, a noisier and more riotous gazing record will be hard to find!
Posted by Paul POP! at 1:55 PM