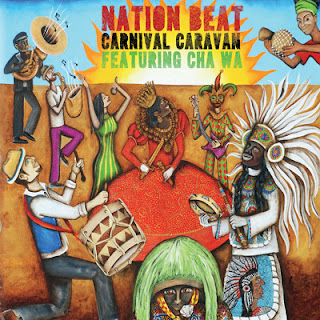 Nation Beat's latest ep, Carnival Caravan featuring Cha Wa, is a five song trip to Brazil via New Orleans.    It's a crazy mash up of party atmospheres that lends itself to an upbeat, up-tempo, percussion fueled vibe that's filled with energy.  This short record is an ethnomusicologist’s dream of what cross cultural pollination is all about.   South American maracatu drumming meshes with New Orleans second line rhythms and funk to fuse a sound that's as celebratory as it is unique. If you were to look up quirky music in a dictionary Nation Beat would be next to the definition.

From the funky vibes of “Casa Diamante – Sew Sew Sew,” complete with fuzzed out guitars to the extremely catchy fun of the NOLA fueled march of, “Liza Jane,” you'll have no idea what continent you're on, what influences are playing off one another and why you can't stop tapping along.  National Beat are truly a Carnival Caravan and they're taking their party from the streets of the French Quarter to the carnivals of Brazil and everywhere in between.  Carnival Caravan is the sound of diversity and a lot of fun.
Posted by Paul POP! at 3:39 PM