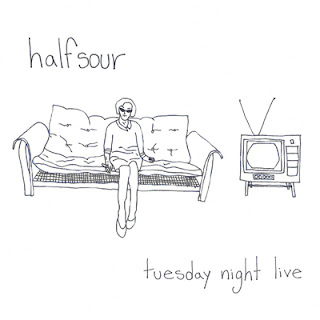 Half Sour’s album Tuesday Night Live is a raw and rough indie pop record that rumbles, bumbles and stumbles its way through the genre with an energetic fervor that’s brimming with honesty and purity.  These guys are not world class musicians and clearly did not spend a gazillion dollars on Tuesday Night Live but they’re so damn genuine that you can’t help but love every note on this record.  The whole thing sounds like it was duct taped together while being recorded on a Radio Shack Realistic tape recorder in the band’s warehouse; it’s a mess and sloppy but bloody brilliant.

Half Sour are so seemingly free of pretension that they just write songs that give big aural hugs.  If you’re looking for comparisons think of anything on Matinee, March or Jigsaw Records (their label) and you have an idea of what these guys sound like.  There are melodies that will melt your heart, boy-girl vocals that are sugar rushes of sweetness, jangly guitars that jump around and a sense of fun that picks you up off the ground and forces a smile on your face.  This is pure pop goodness with a heart as big as Jupiter and songs as syrupy and melodious as they come.

Tuesday Night Live is a big hearted blast of fun that’s an absolute joy to listen to.  In the dead of winter records like Half Sour’s are rays of sunshine that melt away the gloom and remind you that spring is just around the corner.  It may be uncomplicated and as messy as your house but sometimes a little frenetic chaos is the sign of genius and in the case of Half Sour I’d definitely say that’s the case!
Posted by Paul POP! at 2:00 PM

Email ThisBlogThis!Share to TwitterShare to FacebookShare to Pinterest
Labels: half sour