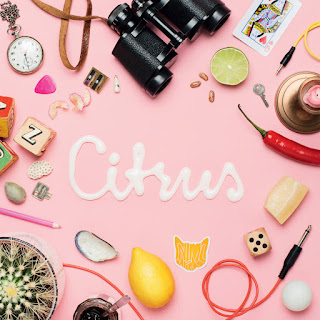 Animal Daydream's Citrus 7” is a blast of post 60's jangle that has so much Byrdsian goodness running throughout it you'd swear Roger McGuinn was in the band.  The four songs on this single are fantastic melodic gems that are sweeter than grapefruit with sugar on top.  Seriously, this is a great little record that highlights the never ending awesomeness that Animal Daydream constantly release.  Jangly guitars with psychedelic flourishes pair nicely with the melodious melodies here and the result is a single of summer pop perfection for the dead of winter.

The record is bookended by the two best songs, “Citrus,” and “In My Room.”  The two tracks are jangly and slightly psychedelic tunes that have a brilliant pop sensibility about them.  They really are pop hits, just fifty years late to the party.  There's nothing to fault on Citrus except to say that it's only four songs! Enjoyable on either side Citrus is a tangy treat of indie pop run through the 60's with orange tinted glasses (get it?).
Posted by Paul POP! at 2:22 PM