Sword and All That Remains Slay All 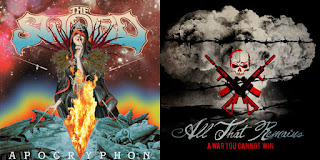 Razor and Tie are rapidly becoming one of the biggest and arguably best metal labels in the world. They've got their bases covered with bands that play screamo, emo, death metal, death core, power metal, stoner metal...heck a little bit of everything. As if to prove that point Sword and All That Remains stumbled across my desk and the dynamic between the two bands couldn't be any greater. Sword is total stoner metal straight from the 70's and All That Remain are the aural equivalent of a steamroller.

Sword's latest album Apocryphon is the greatest record that Black Sabbath never recorded. This is a slow churning doomy record with chords that could annihilate small towns. It's all power and and massive hooks and it's the sort of record that just kind of rolls over you with it's sheer force of will. It's just amazing of how similar this band is to old Sabbath. This stuff is so authentic sounding that if a young Ozzy Osbourne isn't their vocalist I'd be amazed. Comparisons asided Apocryphon is an awesome record of brutal doomtastic metal on it's own right that doesn't beat around the bush and just levels you straightaway. You've got to love that...all killer and no filler this is an essential slab of doom.

If Sword is the classic end of things than All That Remains is the modern end. This somewhat legendary group successfully meld emo, screamo, death metal, and enough guitar histrionics to set the world on fire. These guys are good and their latest album A War You Cannot Win proves this point over and over again. This is a band that's beyond technically proficient and so easily mixes guitar and vocal styles together that it almost sounds like a DJ did it. While I will always appreciate the full on death metal growl more than the wimpy emo bits, these guys seem to find a happy balance that keeps everyone happy. A War You Cannot Win is heavy, make no mistake, but there's enough melody here to make the record accessible for people who don't like to grind it out. With riffs sounding like cruise missile attacks and the vocal assault booming out of the resulting mushroom clouds, All That Remains leave a swath of metallic destruction that's simply epic. With Slayer like guitar solos, vocal wipeouts and screams of agony this is one band that truly does it all and does it well. A War You Cannot Win is an accessible record that's excessively heavy but surprisingly melodic and in the end it's that combination that makes this record work.
Whether it's the classic sound of Sabbath or the modern sound of the apocalypse both Sword and All The Remains have you covered and you're not going to find two better records than A War You Cannot Win and Apocryphon. While they differ in approach and sound both bands have metal coursing through their veins and that's what truly matters.
Posted by Paul POP! at 11:43 AM

Email ThisBlogThis!Share to TwitterShare to FacebookShare to Pinterest
Labels: all that remains, sword