Colleen Green Socks It To Us 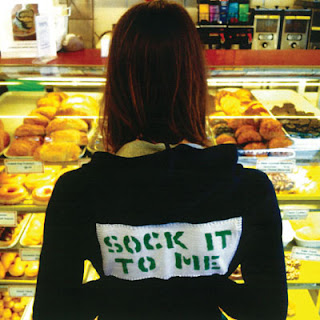 The joys of technology today include the fact that you don't need a big huge studio or recording budget to be a rock and roll star. There's so much lo-fi stuff on the market that's good and so many dance records being made in bedrooms around the globe that the idea of a big production studio almost seems archaic. As if to prove that point the debut album of Colleen Green Sock It To Me is a jangly jaunt through the lo-fi world on the backs of Veruca Salt, Little Red Car Wreck and a whole host of bedsit indie pop bands that only ever recorded a 7".

Sock It To Me is a lackluster but ridiculously charming record that's firmly in touch with it's inner punk as much as it's inner goth and sees no problem mixing all that angst together. Colleen Green as a result sighs, jangles, gets dark and inadvertently creates an indie pop classic. The whole thing sounds like it was done in her bathroom on a broken PC and I think that it's honesty and it's shambolic nature make it what it is; pretty amazing. Colleen stitches songs together with a charm and temperament that's just too cool for school. With vocals that would make Nina Gordon blush, chunky bass lines, drum machines with test patterns, and synths that wash over you Sock It To Me is a no-frills journey into indie pop heaven. It's shyness and recklessness is just brilliant and you kind of want to hug Colleen Green when the whole thing wraps up.

It may not be glamorous or big budget but Sock It To Me doesn't need to be to be awesome. Colleen Green has great songs and that easily overcomes all the hurdles of the record's lo-fi-ness. She seductively broods across most of this record and manages to pull your heartstrings while she does this. It's masterful in it's manipulation and sugary sweet in it's delivery and when you least expect it socks it to you right between the ears.
Posted by Paul POP! at 4:47 AM