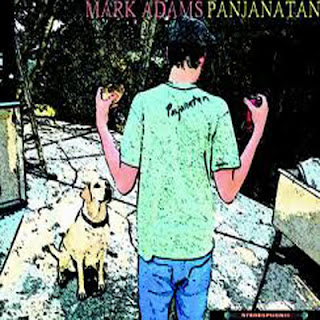 I have no idea where Panjanatan is and my guess is that artist Mark Adams doesn't either and yet somewhere deep in the recesses of his imagination I suppose that's where his latest record was recorded. Adams is a cool songwriter who may only be one guy but he crafts songs that are far deeper and richer than one guy and a guitar. With a massive pop sensibility at his disposal and an obvious adventuresome imagination he puts together quirky songs that come off sounding something like Cake in a tussle with Dylan.

Panjanatan is a fun record because it's got so many dimensions to it; from hooks to humor it all finds a nifty little niche in which to make itself home in. The songs are quirky and catchy and feature all kinds of intriguing arrangements and instrumentation that keeps your ears perked up. As if to prove that point there are electronics, acoustic guitars, horns, string samples, and lots more all over the place and as a result Adams sounds like he's got a thirty piece band backing him up throughout Panjanatan. There's so much depth and texture to each of the songs on Panjanatan that the record sounds well honed and perfectly produced and much larger than it actually is. Panjanatan is the sort of thing that proves that you can be a singer songwriter and still bring a thousand elements and ideas to the table.

I thoroughly enjoyed Panjanatan; it's an imaginative, quirky, and easily remembered record. The songs are fascinating, at times funny and have subtle and slightly weird pop hooks to them. I think it's just my sort of record. I'm not sure who Mark Adams is, what he looks like or where he comes from (bios are great things)...but he definitely put the mythical Panjanatan on the map as far as I'm concerned and it's a place I'll want to revisit again and again.
Posted by Paul POP! at 11:58 AM