Christian McNeill and The Seamonsters 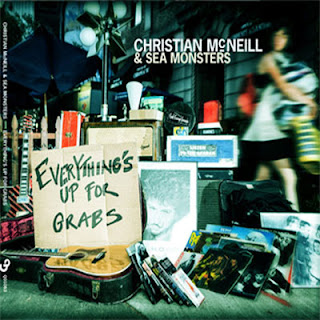 Christian McNeill is a self described "career songwriter," from Ireland but after hopping across the pond, now residies in Boston. Originally in Irish punk band Schtum McNeill's tastes and chops have changed over time as he migrated from another band Hybrasil to his latest incarnation with the Sea Monsters. With his new band and overwhelming presence McNeill tackles good old fashioned blues inflected rock that sounds like it's coming straight from the Bayou rather than Beantown. His bands album, Everything's Up For Grabs is a bombastic groove laden gem of a record that's a treat to listen to.

In listening to Everything's Up For Grabs it's hard to ever picture McNeill as a member of a punk band. In fact, so much of this record is laden with horns, background singers, McNeill's brilliant voice and catchy guitar work that Everything's Up For Grabs is about as unpunk as unpunk can be. That's awesome though because this record is so much fun it seemingly has no time for angst. It's packed with so much energy and spunk that it's infectious. When those horns come in on just about every song it's a goose bump moment; so, so good. From the groovy and soulful, "Don't Make Me Wait," to the brilliant bombast of opener, "Zero," Everything's Up For Grabs sees McNeill maturing into one heck of an artist.

Christian McNeill and Sea Monsters have come up with a gem of a record here. Everything's Up For Grabs is the best non-tradtional blues rock record I've heard in a very, very long time. Packed with soul, gusto, and enough brass to fund your retirement there's very little about this record that isn't great. As a result, it's easy to say that this record is highly recommended.
Posted by Paul POP! at 4:57 AM