Eccodek Are Singing In Tongues 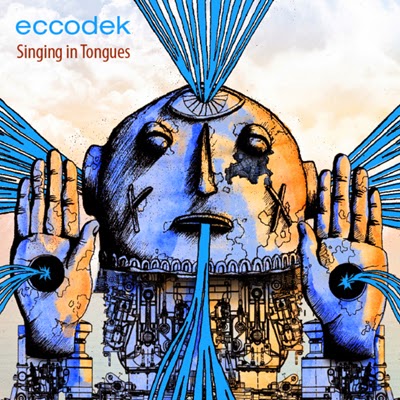 The Afro-Indian via Canada group Eccodek have just released their sixth album Singing In Tongues and it's a doozy. Featuring Malaian vocalist, Jah Youssouf this rather eclectic group takes firmly rooted Afro-pop music and injects it with a sense of globalism that crosses borders and genre's with ease. The album is a fantastic combination of chilled out grooves, deep basslines, global diversity and top notch song writing.

Singing In Tongues thrives on it's pan-global approach to creating textural sound collages that enlighten, expand, and groove. Eccodek's ability to fuse a diverse ranges of influences and sounds into something so cohesive and so memorable is truly awesome. Just listen to, "In My Tribe," for a perfect example of this; the song is a chillout masterpiece that almost sonically aligns your chakra's as it's beatastic exploration spreads out across five minutes. Chill out room or peak time dance floor, one gets the feeling that Eccodek could fill either at the drop of a hat. While not every song is as beat driven as, "In My Tribe," Eccodek still find ways to keep music from foreign lands in different languages intriguing. Clearly these Canuck's know a thing or two about writing a good song and after six albums this should really be of no surprise.

Quite honestly, if you were to look up the definition of a perfect "world" music album I'm pretty sure that Singing In Tongues would be next to it. It's a chill out album with a global heart beat and it's so expansive and adventuresome you should probably have your passport handy while listening to it. Eccodek are awesome at what they do and their longevity is proof of that. Singing In Tongues is a welcome addition to their lexicon of albums and could very well be my favorite.
Posted by Paul POP! at 9:04 AM

Email ThisBlogThis!Share to TwitterShare to FacebookShare to Pinterest
Labels: eccodek