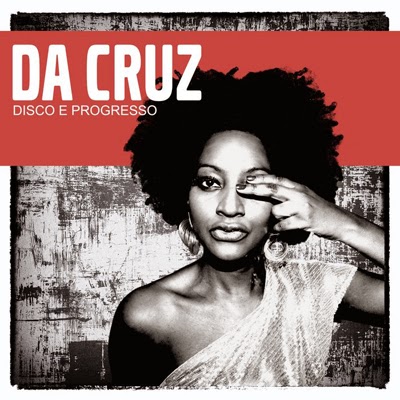 As you or may not know Brazil is pretty much becoming the center of the universe over the next four years. With the World Cup starting this month and the 2016 Olympics in Rio this South American country is taking center stage. It should really be no surprise then that there's an explosion of Brazilian music arriving on our shores and it's a welcome arrival from a country that seemingly alternates between revolution and celebration. Da Cruz, a band rooted firmly in Brazilian tradition and music, but oddly enough living in Switzerland have just released their latest album Disco E Progresso and it's a reflective, expansive sprawling two record set of lightness and darkness or revolutions and parties.

Despite being about five thousand miles away from Brazil, Da Cruz and it's frontwoman Mariana Da Cruz hasn't lost touch with her homeland and it's promise, it's struggles, or it's fun. You realize this about thirty seconds into Disco E Progresso that while they might be in a different hemisphere, musically Da Cruz are in the heart of a Rio de Janiero carnivale. Energetic, funky, and sexy Disco E Progresso is a massive effort that's influenced by disco, funk, dancehall, Kuduro, house, samba and indie rock. Da Cruz is a genre onto itself; be it urban Brazilian disco, tropihouse, or something altogether different it's a modern interpretation of the current state of the Portuguese speaking nation and it's as diverse and cosmopolitan as the country itself. Disco E Progresso is constantly in a state of motion, generating excitement and energy throughout the two records that make it up. Dark side or Light side either record is a blindingly brilliant well-traveled effort that grooves, shakes, rocks, rolls, and then chills out. It's a beautiful effort that cross pollinates genre's like a honey bee on overdrive. I love how they leave no sound or influence unturned and as a result come up with a reflection of not only themselves but of their subject matter and the country in which they live. Disco E Progresso is a gorgeous record with a bit of an edge and a bit of sexiness battling it out over the course of it's two records. Who wins is really up to personal taste but I find myself drawn to the sunnier side.

Endlessly entertaining, incredibly crafted, and intensely diverse Disco E Progresso is indeed a progressive effort. Da Cruz pushes things forward here and be it songs brimming with positivity or concern Disco E Progresso is always in a state of movement. It's an album with a frenetic pace that doesn't want to slow down and I love that about it. This is a record moving at the pace of Brazil's future, rapid and bursting with potential. As the World Cup nears and Brazil prepares to win it's fifth title (I know Spain & Germany might have a say in the matter but how can Brazil not win...) this is the perfect warm up album, come down album and just an amazing thing to listen to period. Highly recommended.
Posted by Paul POP! at 5:06 AM