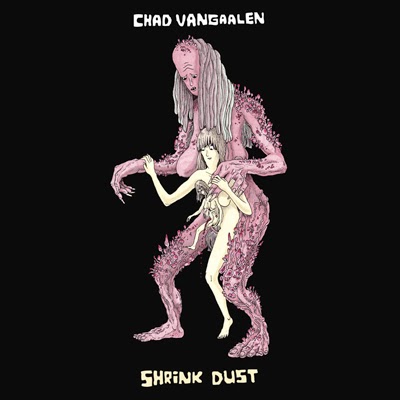 To say that Chad Vangaalen has an active imagination would be a bit of an understatement. This guy has so many creative outlets and so much work under his belt it's almost impossible to keep track of. He's in approximately 78038434 bands including two with his children. He does art, he animates, he recklessly experiments with musical instruments, and he's been described as Bob and Doug McKenzie in space. One listen to his album Shrink Dust and you'll see what we're talking about.

Imagine the Flaming Lips but weirder and fronted by a guy with Walt Disney's imagination on acid and you kind of have an idea of where Chad lives. He's the very definition of necessity leads to the mother of invention; case in point he wanted to score a science fiction movie so he decided to make one so that he could. That spirit of invention and imagination permeates every note on Shrink Dust. It's weird, atmospheric, adventuresome, experimental, and at times doesn't sound like it's from this earth. CVG (as his friends call him) throws twenty sheets to the wind and writes haunting songs that cast spells of unusual sounds, strange ambiance, and weird ideas. Shrink Dust doesn't sound the best or try to (apparently CVG has never been inside a real studio) and that's half the charm of it. In listening to Shrink Dust you can almost picture CVG playing all the instruments and tuning everything in a harrying pace in his living room while trying to keep his kids occupied. It's all very busy, strange and intriguing and while there's not a hit on this album you can't help but latch on to every note this guy churns out. Shrink Dust is a heartwarming and endearing effort because it has this peculiar innocence about it that sucks you in with curiosity. It's all very uncomplicated, free flowing, and childlike and as such is the perfect reflection of CVG. This is the soundtrack to having Peter Pan Syndrome and it's awesome.

Shrink Dust is an open window into the imagination and ruminations of CVG's life. It's a odd place to visit but you'll want to come back again and again and see what's new because every time you visit there will be something that you haven't seen before. It's the kind of record that people that are endlessly fascinated by everything will enjoy. It's music for people with brains that never stop working and I think that's why I've enjoyed it so much; it put my imagination in overdrive and left me in a bit of awe. Shrink Dust doesn't rock so much as it aimlessly wanders with a never ending sense of wonder and that's why it succeeds.
Posted by Paul POP! at 8:45 AM