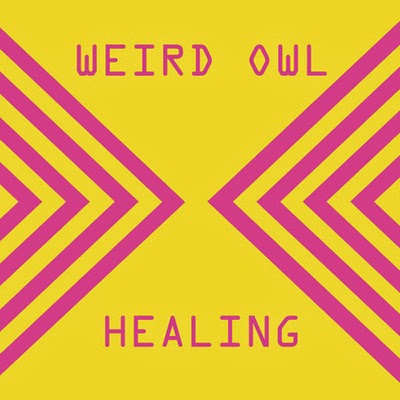 Despite the rather hokey play on words Weird Owl is NOT Weird Al under a thinly guised band name. Oh no, this rather amazing Brooklyn band has not one ounce of parody in them. Rather, this decade old unit have proved themselves with longevity in the New York psych scene and garnered international attention for their previous efforts. Despite considering myself pretty clued in, this is the first I've ever heard of these guys and I have to say I've been blown away. It may have taken me an eon to stumble upon them but upon discovering Healing it's a case of better late than never.

Playing absolutely awe inspiring raw psych dream pop, Weird Owl is caught in a musical vortex that swirls around in a haze of early 90's British pop and 70's California garage psych. On Healing they compose extensive dreamy riffs and ethereal atmospherics in a swirl of reverbed out riffs and clouds of vaporous vocals. It's all very nebulous, spatial, and angelic in it's approach. Think along the lines of early Sundial or a bit of Spacemen 3 and you're on the right track. Healing is fantastic stuff packed with cloudy and gauzy songs but it's disappointingly short at only five songs. You barely get a contact high from Weird Owl before the record is all over.

In listening to Healing it's easy to see why Weird Owl have had the longevity they have. Weird Owl remind you of everything that you originally loved about shoegazing; they're raw, far out, and lost in a cloud of something but still remarkably easy to latch on to. Healing is an awesome excursion into the unknown and ethereal and easily one of the best psych/nu-gazing records I've heard in a while.
Posted by Paul POP! at 8:26 AM