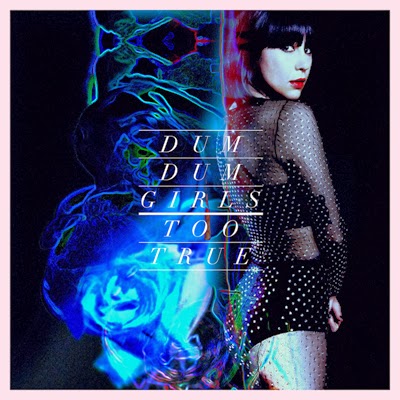 Okay, somewhere along the line I lost track of the Dum Dum Girls and everything changed. What the heck happened? Gone are the days of raw, simplistic garage rock. Where it rode off too is beyond me. However, it seems as though, with their new album Too True the DDG's have left the garage in a sleep sexy Ferrari purring on all cylinders.

With the indie pop goodness pushed out of the way, the Dum Dum Girls have arrived at their new musical destination with a seductive, polished and refined angularity in tow. Too True sees the DDG's maturing into something amazing that takes everything learned with previous efforts fine tuning them and honing them into something awe inspiring. The album is phenomenal the whole way through and channels the band's garage rock past into this sleek post punk future with pop hooks, dreaminess, and a level of sexiness that's never been so upfront. This record almost feels as if the Dum Dum Girls have emerged out of musical puberty as a supermodel.

Too True is dreampop lost in a haze and front woman Dee Dee's voice sparkles on every note and on every track. It's a spectacular turn of events here that has left me stunned. This is a jaded, lovelorn album that sees the Dum Dum Girls emerging from their youth into the peak of their seductive powers. Fantastic in every way imaginable, the DDG's have created what could potentially be our album of the year.
Posted by Paul POP! at 9:01 PM