Hooverphonic Are Back The Night Before 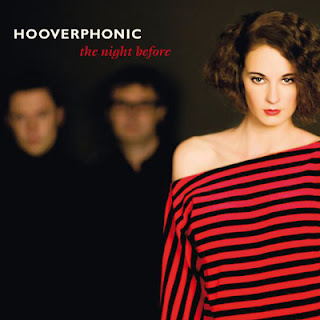 As I opened this package I couldn't help but think that it's been six years since Hooverphonic last released a record! That's a lifetime in the music industry, so to actually see The Night Before come across my desk was a pleasant surprise!

Unlike their earlier works, The Night Before isn't so much a trip hop record as much as it's epic theatrical pop. The album is lush, sweeping, and sensuous stuff that will tear your heart apart. It's gorgeous lovelorn pop that's seductively sexy and slyly manipulative; vocalist Noemie Wolfs is determined to have her way with you on this set of songs and you'd be an idiot not to let her.

The Night Before is so dramatically beautiful that the whole thing comes off like a series of torch songs sung in a smoke filled dark room to an enraptured audience. Even at it's poppiest The Night Before is still opulent, textured, and breathtaking. It's obvious the effect of having previously worked with an orchestra has had on the band; the arrangements throughout are stunning and the orchestral sounds continue to contribute immensely in creating an extravagant atmosphere. The whole thing sounds like a John Barry soundtrack on overdrive; it's like a series of the best Bond anthems never written.

Sixteen years after their debut it's awesome to see and hear Hooverphonic carrying on. Overwhelming, emotional, and excellent, The Night Before is a welcome return to form from one of the best bands to come out of the trip hop movement. With music as strong as the songs on The Night Before it's easy to see them continuing on for another sixteen years. The Night Before is a fantastic record and probably one of my favorites of the year..
Posted by Paul POP! at 10:14 AM

Email ThisBlogThis!Share to TwitterShare to FacebookShare to Pinterest
Labels: hooverphonic