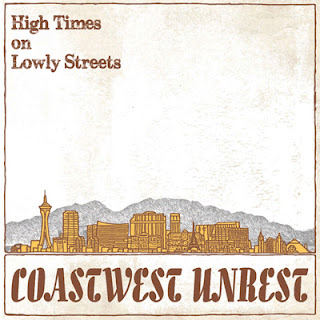 Coastwest Unrest are yet another folky band that attempt to offer up something a little different. Their album High Times on Lowly Streets is a rustic, woodsy, folk, jam band kind of record that alternates between being something like Arcade Fire and the Dave Matthews Band. A strange combination, I know, but it's just got this hippified pseudo-bohemian feel to it that both frat boys and hipsters would seemingly enjoy.

With awesome baritone vocals that sound like Ric Ocasek lost in the mountains, Coastwest Unrest take all this Northwest log cabin-ish atmosphere and channel it into traditional arrangements and folky instrumentation. The results are songs that have a dramatic deep woods feel. Songs are laden with strings and deep vocal overtones and you can almost feel the foggy coldness and smell the hot coffee as this album progresses. It's all very rustic, arty and sweeping but still still feels intimate and emotional.

High Times on Lowly Streets conjures pastoral images and and a simple life. Wrapped in flannel and given depth with cello and violin Coastwest Unrest have created a homespun brand of folk music that's easy to latch on to. Their ability to weave jam band and arty pop elements into songs give them a widespread appeal that's bound to benefit them. High Times on Lowly Streets might be more suited for a woodsy environment than on lowly streets but that's OK.
Posted by Paul POP! at 9:38 AM