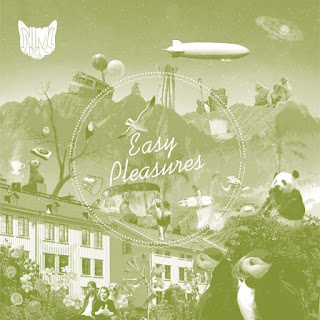 Animal Daydream are a band so in love with west coast pop they seemingly have gotten lost within it. Their recent four song single Easy Pleasures is a ray of sunshiny jangle that's as laid back as a Sunday morning in Santa Barbara. With enough of a Teenage Fanclub/Tyde influence to make you wonder if they're not really lost in Britain as opposed to California, this group gently strums guitars, layers harmonies, and write songs as if the sun was in perpetual sunset mode.


Easy Pleasures is an absolute joy to listen to. It's uncomplicated breezy nature is as warm as the sun and as fresh as the salty beach air. Each of the four songs are melodic masterpieces that are bright even when they're going on about rain. If ever there was a soundtrack to a bonfire on a beach, Easy Pleasures would be it, it's casual and optimistic tone is the perfect way to top off a long day in paradise. This record truly is an easy pleasure.
Posted by Paul POP! at 8:21 AM