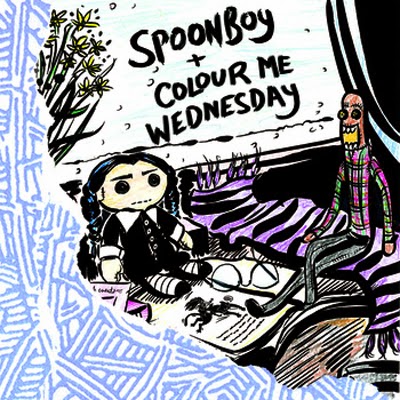 Spoonboy is the alter-identity of musician David Combs and was started as a creative outlet for him when he wasn't working with his normal job The Max Levine Ensemble. A decade into his alter-identity and he's released two solo albums and now a series of split records with Martha, Colour Me Wednesday, and The Goodbye Party all of which are tiny slices of power pop heaven.

Fully embracing the term power pop, Spoonboy play enthusiastic, frenetic pop music with huge riffs and even bigger hooks. The nine songs that make up the three split records are all top notch spiky pop tunes that are energetically played and are catchy as the flu. Massive melodies are in abundance and his ability to turn a phrase into something you can't forget no matter how depressing the content is a true sign of Combs' talent.

He might not be the happiest guy on the planet, but his voice and his songs would seemingly convince you otherwise. Combs is an excellent songwriter and he's able to cram so much within the span of three minutes that it's remarkable. I love the energy of these songs and I love the fact that at times he's rather direct in his approach. I'm not sure which of the nine songs are on which spilt record, so I can't recommend a specific split over the others so I'll just recommend you hunt down all three of them and bask in their frenzied & quirky glory.
Posted by Paul POP! at 9:34 PM

Email ThisBlogThis!Share to TwitterShare to FacebookShare to Pinterest
Labels: spoonboy