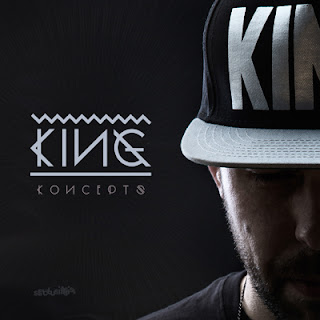 I think we can all admit that dubstep has gone mainstream. It's the new hip-hop. No longer underground, it's become the soundtrack of fratboys and Jersey Shore wannabees at this point. So if you're an artist within this genre and you're trying to keep it "real," you've really got to stand out. I mean, honestly, Skrillex is a nu-metal kid gone wrong and for every 50 of artists like him there's only one like King.

King is far from your usual dubstep artist and his album Koncepts is anything but a bog standard dubstep record. Where King differs from most is that he manages to take hip-hop production techniques and fuses them with dubstep flavors. The result is a sound that sounds like DJ Shadow trying to escape a prison of bassbins a mile high. King creates crisp instrumentals and tight beats and then layers that on top of minimal production that is almost reminiscent of someone like techno legend Joey Beltram. Koncepts as a result of this deadly combination is a very good and very different record.

Unlike most dubstep, Koncepts is anything but harsh; it's sparse and attacking and chooses it's approaches carefully without bashing you over the head. It's a fascinating record that given a touch of vocals here or there could be downright lethal. As it stands though Koncepts is a unique sounding record than most in the genre and it even feels different than most. Lost between worlds and stuck in the Matrix King has created an album that's almost like an audio map of his attempted escape route. It's a fun ride filled with thrills and drama and King's own unique way of bursting out from the underground.
Posted by Paul POP! at 8:50 PM

Email ThisBlogThis!Share to TwitterShare to FacebookShare to Pinterest
Labels: king