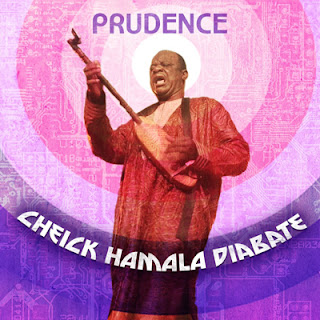 With world music becoming more and more mainstream and genre's like indie rock stealing ideas from it, it only seems logical that the dance music community would follow suit. And they have, from chilled out remixes to dubsteppy takes on global grooves producers worldwide have found a whole new world in which to get lost in. Cheick Hamala Diabate is just the latest artist to have his work reinterpreted by a host of electronic artists on an album. Prudence is a joyous mix of old and new that's intimate and yet dance floor friendly.

Mixing classic music from Africa and modern electronic music Prudence illustrates what can happen when traditional meets bleeding edge. This is a genre defying excursion across the continents complete with jazzy chilled vibes, big beats, tight grooves, and African influences. The record is composed of six energetic remixes of varying paces and approaches but all are a unique take on Cheick Hamala Diabate's already unusual sound. It's a fascinating and dizzying record that is constantly in a state of movement and it's energy throughout is infectious.

From funky guitars to blown out drum sounds it's all hear living in harmony with all sorts of overtones and global influences steering the way. This is an album that shows anything is possible and that modern and time-honored sounds can work together to create a new sound collage that's respectful and limitless. Prudence is the sort of record that opens peoples minds to what's out there and what's possible and one suspects that's the idea.
Posted by Paul POP! at 8:38 PM