Bunnygrunt Rawk Out On Volume 4 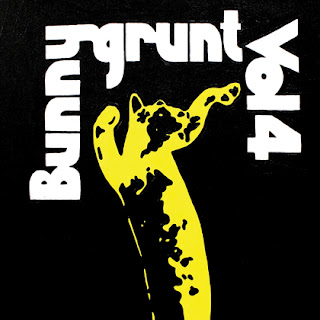 I have to admit when the new Bunnygrunt album showed up and it looked like Black Sabbath's Volume 4 I was really, really hoping they did a twee pop cover record of the metal classic. I wasn't disappointed that they didn't because the songs that actually make up their Volume 4 are pretty darn strong on their own without the hand of Ozzy. While not Sabbathy in the least Bunnygrunt crank up the guitars, fire up the twee and bash heads with indie rock on this romp through jangly guitars, cuddle core choruses, and a whole hell of a lot of fun.

What I found most interesting about Volume 4 was just how indie rawk these guys have become. This isn't Jen Fi in any way shape or form and the whole thing kicks butt from start to end. Regardless of what direction they take on any of the songs here, each of them are as catchy as the flu and have that wry sense of humor the band has always had. I mean the first song is called, “Gimmie Five Bucks,” how can you no chuckle at songs like that especially with a giant Ozzy cat on the cover of the record. Throw in sugary sweet girl/boy vocals and you have a record that's just about as perfect as lo-fi can be and something that doesn't take itself overly seriously. I think this is why I've always liked Bunnygrunt; they're seemingly goofballs who still have incredibly awesome tunes.


While Volume 4 is a 100% Sabbath free, it is filled with 100% awesomeness that straddles the line between indie pop and indie rawk with superb balance. The record is a harmonious ruckus and is a solid notch in Bunnygrunt's legacy of indie pop goodness. Now if we can just convince them to do a tweepop version of “Supernaut,” that would be amazing.
Posted by Paul POP! at 7:19 PM

Email ThisBlogThis!Share to TwitterShare to FacebookShare to Pinterest
Labels: bunnygrunt