Fanfic Are Maneuvering Around Awkwardness 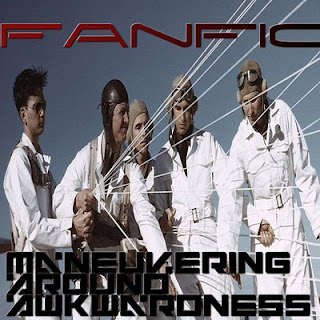 Fanfic's debut album Maneuvering Around Awkwardness attempts to do just that. Yet, this dark wave synth pop inflected record is the sort of thing that you would find in the dark corner of a club dressed in a trench coat mad at the world. Firmly in touch with it's inner goth but finding rays of hope in pop music the band construct songs that Joy Division wish they wrote, OMD would have written in 1982, and VNV Nation would dance to now. This is utterly gorgeous stuff that's so depressingly good and so darkly lit that if you're not careful you'll look right over them.

With lush, murky synths and baritone vocals that just sound lost and detached Fanfic so easily create atmospheric songs that while obviously rooted in the shadows have glimmers of light and the choruses to match. This is music to pull rope to, smoke clove cigarettes to, get lost in dry ice with; it's got a heart of darkness but a soul in love and it's got truly amazing songs. I always find stuff like this a study in dynamics, because on one had you have this grim like feeling permeating every song but at the same time the songs are so overwhelmingly good that the grimness becomes overshadowed by what's actually being played..Something good to shine against the “evil.”

Fanfic can write great songs that's the short of it. They wrap their amazing songs in shades of darkness, depression, and hopelessness but much like Darth Vader there is good in them...and it eventually wins out. Maneuvering Around Awkwardness is a great record because of this constant struggle between darkness and light. The songs bristle with easy to latch onto rhythms and lyrics but the murkiness and haze that surrounds them give the songs an edge. Fanfic are awesome at what they do and I'm totally a fan of Maneuvering Around Awkwardness both musically and in reality.
Posted by Paul POP! at 9:26 AM

Email ThisBlogThis!Share to TwitterShare to FacebookShare to Pinterest
Labels: fanfic