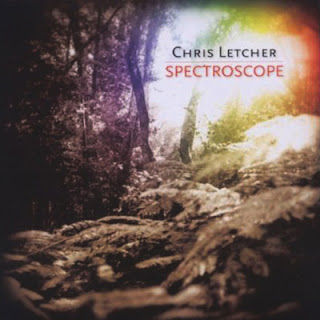 Chris Letcher's new release Spectroscope sees him picking up right where he left off four years after releasing his critically acclaimed debut album. He’s produced one heck of a sweeping pop record that might even be better than his debut. It's fantastic stuff that's loaded with horns, strings, piano's, vintage synths and just about everything in between. Sounding something like a dramatic Modest Mouse, Letcher chops his pop up and makes it jumpy and atmospheric.

As a result of this Spectroscope is an eclectic record that's filled with drama, rays of sunshine, and songs that are mesmerizing. It's obvious, having listened to Spectroscope, why this record took four years to make; the attention to detail and sound is stunning and the production on this record is awesome. Dreamy, lush, and intriguing this is a record that you have to sit down and listen to in an effort to make sure you don't miss anything. Spectroscope is so packed with details and interesting flourishes that command your attention that straying from it will result in the loss of valuable music and that would be a crime.

Spectroscope is a perfect name for this album as it covers a range of sounds and environments like the colors of the rainbow. Having listened to this it would be ashamed if we had to wait another four years for another record. And while I know his songs need that much time to grow, Letcher's stuff is just too good to wait for.
Posted by Paul POP! at 4:00 PM